Gone are the days when women were considered a weak gender. Today, what men can do, women can do even better. Talk of the most difficult of careers like engineering, construction, information technology, architecture, health, transport, mining, etc, and you’ll find women there.

In the sports world, every game has got the women’s and men’s league. This includes hockey–tough as it is. There are women that have challenged stereotypes and established themselves as big names in women’s hockey.

She is arguably the most underrated woman player in the women’s league despite of her being a superstar. Her production has been overshadowed largely by Knight’s star power possesses. However, it’s no doubt that Decker has been productive and has the ability to be more game-out, game-in dominant than most of the players.

Decker has won World Championship gold, Olympic gold, NCCA crown and league titles in NWHL and CWHL across the past decade. The team USA star has played a total of 192 games and garnered an average of 1.84 points at all levels.

Poulin plays for team Canada and the news that she is not finishing in the first place is news indeed. She is the one that scored the 2010 gold medal winning goal and in the 2014 Olympics. Poulin is the decade’s second-highest Olympic scorer after Meghan Agosta with six points difference.

Poulin is also Canada’s most prolific World Championship scorer in a period of 10 years. Also, she led the CWHL in scoring three times and also won the league’s MVP award three times.

Also, she is the leading American scorer at the Olympics in this decade. With her international accomplishments, she should ranker higher on this list, but the two players ahead of her showed greater dominance level in club play at the CWHL and NWHL levels.

Szabados plays for team Canada and got into the limelight during the 2010 Olympics and hasn’t left it since. She has won two gold medals, two Top Goaltender awards and other international accolades.

In four seasons, she has played in the SPHL where she played two seasons as a split-time starter and the last two for the NWHL’s Buffalo Beanuts.

It was her first time into the women’s professional circuit but her numbers have been remarkable since then. She won the Netminder award, the league’s top award with 1.49 goals.

Schofield plays for team USA and became a household name after the 2019 NHL All-star Game Skills Competition performance. During the competitions, Team USA stood out and displayed her wheels, though she was already a star.

When she made her debut at the senior national level, she became an impact player in women’s hockey. She is the third-highest scoring American Player of the decade at the World Championships. Coyne at the 2019 tournament was named Top Forward and has nine points in 10 Olympic contests.

She plays for team Finland and hers is the greatest positional debate in the history of women’s hockey.  Question is, if Noora was Canadian, at what position would she rank on the all-time list?

Some think she is Shannon Szabados’ keeper who appears later on this list just because Raty is not equally decorated. However, Raty has a World Championship MVP, various NCAA honors and has taken Finland to some great international heights like two Olympic Bronze and World Championship Silver.

There are a number of women that have mastered the game of Hockey and remain to make big impacts in the history of Women’s Hockey. They have won World Championships, Gold medals, bronze and Silver. It’s these women that have revolutionized the 20 years period since Women’s hockey came into the Olympic Stage. 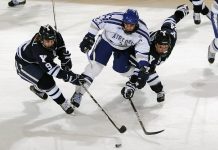