For those who have only heard of lacrosse on Mean Girls, then you need a little more education on what this game is all about. In this blog, we shall be telling you about the unique origin of this great sport. It is an action-packed and extremely fast-paced game that is played with ten players, and the truth is that Mean Girls did not do it justice. There is so much more to the game than what meets the eye.

The players usually use sticks that have nets in them to throw balls to other players, while moving up the field towards the goal post. The object of the game is to score a goal at the end of the field. It is actually known as one of the fastest games on two feet.

As life keeps evolving, we tend to forget where some sports started. Especially when they are now the most popular games. We need to change this habit, and try to understand where sports came from. Learning how they were played in the past gives us a greater understanding of the game.

You may have just now started hearing about the game, but one of the earliest mentions of lacrosse was found in a document that was written in the year 1612. This is how old the game really is. Currently, you could describe it as field hockey, which is a popular game in Europe. Interestingly enough, in the beginning, only adults used to play the game. However, nowadays, the people who play it the most are kids.

Originally, this game wasn’t even called lacrosse. A French Missionary, Jean de Brébeuf, gave it its current name, but originally it was actually called “stickball.” It involved the use of a stick and a ball, hence the name. As the game became more and more popular, it moved from the use of a simple tree branch to the use of extremely complex instruments such as deer sines, bones, and even fishing nets. Needless to say that if this was the same situation now, it would probably be less popular.

The balls also had their own share of evolution. Originally they were just wooden balls, but with time they changed to balls that had sticks and fur on them and were wrapped in deer hide to keep them together. It is laughable imagining playing the sport with such a ball today.

The initial and current rules are actually not that different. Players are still not allowed to touch the ball with their hands. However, today lacrosse players do have some boundaries that they must keep in order to stay inside the field, unlike in the original version.

In the past, the ball could never touch another player’s hand, but a player was allowed to touch another player. Currently, there are some allowances when it comes to touching, but it is not as it was before. There were way fewer boundaries then as far as to contact and the gameplay was concerned.

Although this is technically not a rule, the warm-ups for playing lacrosse were a bit different than they are today. Currently, players are allowed to jog around while doing exercises before they start a game, but this was never the case in the past.

Players usually had a celebration the night before a game that was complete with dancing and lots of food that they thought would help them to win the game. The sport was in essence more focused on the entire aspect of the community rather than the logistics of how best to win a game. The game of lacrosse today is all about winning and following the rules.

The Culture Of The Game

The game of lacrosse brought people together. They used it as a way of communicating and allowing themselves to have fun while exercising at the same time. The games were usually crowded and many players were allowed to participate.

Some players used to paint their faces and their entire bodies with charcoal, which would help them differentiate among the teams. Otherwise, it would have been too confusing due to the large number of players to keep track of.

Lacrosse is certainly a timeless game, and it is amazing to see how it helps release aggression and form friendships. This is why most colleges and high schools include it in their sports curriculums. It is, however, important to remember its origins as this game has made a huge impact on many cultures. 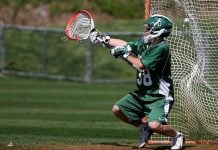