We’re coming to the very end of the MLB season, so we take a look ahead to who might make it all the way to the World Series in a few months of time. With plenty of consistent performers and new talent, as well as old heroes, the playoffs could be outstanding.

This baseball season has already shaped up to be an absolute classic, but the battle lines for the playoffs didn’t go exactly as expected. So, who can you see in this year’s match-up, and how might it all go down?

We break down the contenders, the highlights, and the possible outcome of the World Series.

Perennial contenders, young guns, and those hungry to prove a point: these teams are out to show they mean business in the playoffs, which start in just a few weeks.

In no particular order, the big contenders will be as follows.

It’s always so difficult to guess about the outcome of a series where so much can change might shape up. There’s plenty of baseball to come before the Champions are crowned.

But, if we’re staking our claim, here’s our prediction for the finale in October.

This will be the primetime showdown between two of America’s most famous and popular teams that everyone has been hoping for. The Yankees come out on top in the American League, while the Dodgers win the National League again.

After the frustration of last year’s loss, the Dodgers get revenge (albeit not on the Red Sox), with a thrilling series victory over the Yankees that goes to the final game.

You heard it here first… 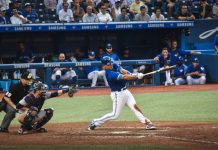